Welcome to the taoofwow.com site 2022!

"Traffic in the ways of Wow and leave this world behind

No earthly woes afflict you when you live from higher mind"

“The student of Wow must choose to believe that the course of any event can be altered by thought alone. No Wow can occur without the belief that the seemingly unchangeable laws of reality are subject to change at any moment. The Wow Master knows that things unseen are behind all things that are seen, and that thought is the first cause of circumstance....”

The Origin of the Tao of Wow

by Johnathan Plank , Ph.D., The World Foundation for Cultural and Linguistic Research. 3.14.01

How to Pronounce Tao

Tao is a Chinese word which, loosely translated, means "way." In the English spelling, the initial character is an approximation of a Chinese sound that does not have an exact English equivalent. The most accurate rendition would be a combination "t" & "d" sound, as in "Tdhow." Many pronounce it "Dow", as in "Dow Jones" (ie., to rhyme with "how" or "now"). ***

What's in a Name?

Since its initial publication on the Internet several months ago, speculation has occurred among scholars as to the exact origins of the Tao of Wow. Its somewhat spotty and elusive history has led many to question its authenticity. Research has uncovered that, although never available in complete form, various components of the Tao of Wow have been known by a variety of names throughout history. During the middle ages it was known as Conquest and Coercion. In the 1700s it was resurrected as Secret Concepts of Accomplishment and Recognition, in the 1800s it surfaced as Mastering the Minds of Men. The most recent manifestation was a doctoral dissertation in 1924 called The Art of Impress by a Japanese theology student who mysteriously disappeared just before the Second World War. The Tao of Wow is the name by which this information is now being presented to modern audiences.
The Tao of Wow has existed in a cloak of secrecy since its first documented appearance in 500 AD. Subsequent research, however, has determined that the core tenets contained within the Tao of Wow may predate the earliest known human writing (3300 B.C.) found in southern Egypt. Other research has found it alive in ancient African civilization at the time of the building of the pyramids. It has been reported that variations of the Tao of Wow's teaching survived the African slave trade and traversed the oceans on its way to new lands in the minds and hearts of captive slaves. It travelled from Africa to the Caribbean, and then ultimately to the United States. Eastern scholars have traced its spread in Asia, which is known to have had paper and printing from as far back as the 2nd Century, A.D. It is this unique tributary effect which explains the Tao of Wow's appearance across many socioeconomic and geographic boundaries.
It was relatively unknown in Europe for several hundred years, but surfaced mysteriously just prior to the Second World War. In fact, several scholars speculate that it played a role both in Hitler's rise to power (an evil use of the Tao of Wow), and then ultimately in the allied forces' victory over the Nazi regime. In America, other editions began to circulate shortly before the Industrial Revolution and prior to the explosion of radio, television, and the golden age of Hollywood.
The last time the Tao of Wow surfaced, it was in prewar Germany. During Hitler's clamp down on free speech, it is believed that the last surviving European text, which had been smuggled out of Eastern Europe, was destroyed in the Nazis' great book-burning fires. A single copy survived in the possession of a concentration camp escapee who would later become head of a major Hollywood film studio. It was this occurrence that led the Tao of Wow to be associated with commercial endeavors. It survived, oddly enough, in the form of acting & charm school lessons, principles of marketing, selling techniques, and guided the careers and fortunes of some of Hollywood's most successful stars. As a result, you can hear elements of the Tao of Wow in songs, commercials, movies and television programs. The ancient knowledge which once helped great leaders conquer their enemies and win the loyal support of the conquered, had entered the domain of entertainers and entrepreneurs.
The historical and contemporary figures, who through exhaustive research, are believed to be in possession of the knowledge, if not actual texts of the Tao of Wow reads like a veritable who's who of influence and genius. They include Tutankhamun, Jesus, Genghis Khan, Buddha, Ghandi, Martin Luther King, Jr., Thomas Edison, Marie Curie, Charlie Chaplin, Andrew Carnegie, Winston Churchill, Abbott & Costello, Charlie Parker, Miles Davis, Muhamad Ali, Bill Gates, Michael Jackson, Bob Marley, Johnnie Cochran, Oprah Winfrey, Michael Jordan, Russell Simmons, Tiger Woods, Venus and Serena Williams, Master P, and countless other personalities in entertainment, politics, sports and the arts. In studying the lives of these individuals it is known that they have, knowingly or not, used elements of the Tao of Wow in building their personal as well as professional trademarks and fortunes.

Reconstructing the Tao of Wow (Coming Together)

Despite its numerous incarnations across continents, the complete Tao of Wow has never existed in one place as a single text. After evidence of its existence was discovered among some dust-covered texts in a subchamber of the Cairo Museum, scholars were led to locating and compiling the disparate elements of a text which had been "hidden" in numerous publications throughout antiquity. Thus began the arduous task of piecing together this unique work. It was often likened to constructing a massive jigsaw puzzle the pieces of which had been scattered in a million places in a corn field.
Over the course of several years, we were repeatedly blessed with information, leads and actual pieces of the Tao of Wow from all over the world.

The monumental discovery and reconstruction of the Tao of Wow raises many questions: How has this arcane knowledge been transmitted from generation to generation? Was there ever a secret sect of so called "Wow Masters" who possessed the full unedited texts? Or, has it simply been through chance that individuals have stumbled upon a combination of actions and thoughts which have led to their success? Is the Tao of Wow simply common sense which can be deduced by any rational thinking human being? Or, as some have postulated, is it an example of what is called Instinctual Knowledge which, like the instinct in lower animals, passes mysteriously from generation to generation?
Answering these questions and putting the Tao of Wow in historical context in relation to other great works across several continents, beliefs, languages and cultures, and human understanding, awareness and consciousness is an extremely difficult, if not impossible task. At this stage, it may never be known how and where the text originated. But, it is our belief that what is of greater importance is the effectiveness of the knowledge contained therein.

The Tao of Wow is a compendium of truths which, applied appropriately, is believed to create extraordinary success in any endeavor. Its origins coincide with the earliest known human writing in 3300 BC. It has experienced resurgences and rebirths, in various forms and identities, just prior to every major cultural, economic and industrial revolution in Africa, Asia, Europe and America. Despite major advancements in communication (ie. paper, the printing press, etc.) it has existed under the cloak of secrecy, and has defied attempts to maintain it in written form for the masses.... until now. Thanks to the Internet, this volume marks the first-ever, worldwide publication of the complete body of works which will forever be known as The Tao of Wow.
I encourage you to make the Tao of Wow part of the life and lessons for young and old, parent, teacher, counselor, mentor, coach, business associate, friend and lover alike.
"Every generation's hope lies in its unhindered access to the best of all preceding generations." That is part of the mission statement of the World Foundation for Cultural and Linguistic Research, and we are proud to be an agent in the publication of the Tao of Wow: ancient wisdom for modern success.
[END]
Professor Johnathan Plank is Director of the World Foundation for Cultural & Linguistic Research (WFCLR) and may be reached at JPlank@WFCLRonline.org. Copies of The Tao of Wow may be obtained for $14.95

“Just wanted to let you know that I've re-read the Tao of Wow cover to cover for the second time and got so much more out of it. I don't know where you got this information but it is a most remarkable book. The essay at the end makes one wonder if the material is for those who are ready to receive it rather than there to change the lives of those who are not. I tend to agree with the former because I got so much more out of the second reading and my life is undergoing some serious change at the moment. I have a clear idea of what I want to accomplish in the years ahead but the path to get there is far from clear. However, with the help of the Tao of Wow, I am able to let that path unfold and recognize it as it does so. Thanks again for making that material available to us mere mortals. It's a tool of knowledge that will make all the difference in my life. All best wishes for your best year ever!”

The Tao of Wow Table of Contents

(The following are the major section headings)
PROLOGUE [click here to download excerpt)
What is The Tao of Wow Trilogy?
How to Pronounce _Tao_
Definitions and Etymology of _wow_
Key To The Tao of Wow Trilogy
BOOK 1: THE WOW FACTOR
I. What is The Wow Factor?
Why?
What is the Wow Factor?
What is Wow?
Who this Book Is For
II. Finding Your Wow Factor
The Secret Formula
Assets
Assets Everywhere
Perception
Exposure
Response
III. Using The Wow Factor
Getting What You Want
Wanting What You Get
The Wow Factor In Action
Impress And Grow Rich
Who Will Be Wowed
The 12 Rules of Wow
The Journey Continues
BOOK 2: THE TAO OF WOW
I. The Achievable Wow
The Achievable Wow
What To Expect From The Ways of Wow
Gain New Sight
Take One Step Inside
Respect The Unsee n
Achieve The Silence of Wow
Avoid Competition
Channel The Eternal Wow
Share The Given Gift
Conquer Fear
II. Wow and The Self
The 9 Disciplines
The 6 Non-Actions
III. Wow and The Universe
Wow And Nature
Filling The Void
Wow And Abundance
The Art of Creation
Controlling The Uncontrollable
IV. Wow & The Ways of The Average Of Men
The Law of Obligation
The 45 Ways of Men [Click for excerpt]
The Failings of The Average of Men
Mastering The Minds of Men
The 24 Questions of The Average of Men
Men And The Cycle of Success
V. Wow and The Ways of the Master
The 13 Commands of the Wow Master
VI. The River and The Rock
Summary of the Tao of Wow
BOOK 3: THE ART OF WOW
01 ~ Objective
02 ~ Enemy
03 ~ Terrain
04 ~ Obstacles
05 ~ Preparation
06 ~ Weapons
07 ~ Strategy
The Rules of Engagement
08 ~ Responses
The World's 9 Responses
The Wow Master's 9 Responses
09 ~ Victory
EPILOGUE
If You Only Knew
A Final Word
Applying the Technique
Origin of The Tao of Wow
Bonus: Something Transcendent

“"I recommend the Tao of Wow to anyone who seeks to draw from eternal/internal power. The book reinforces the importance of one's thoughts and the criticality of looking inward to understand, and even control, what is manifested outward. Knowledge of self is ongoing so I imagine I will read this book several times over.” 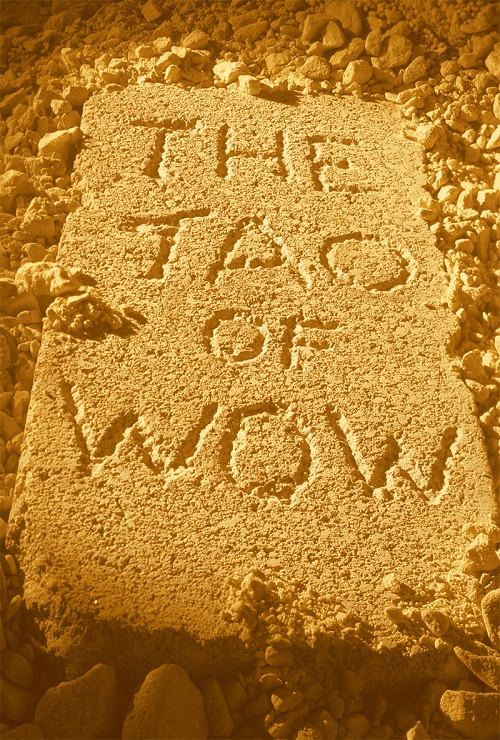 Order in your favorite format: